In a couple days we’ll be four weeks out and this prep has been interesting to say the least. Many of you know I have worked with Chad Nichols, Hany Rambod and also a short stint with Fakhri Mubarak this offseason. After working with all three and a couple others beforehand I can confidently say they have taught me enough that I believed in myself enough to go ahead and do this prep on my own.

I’ve had emails and read comments from people saying, I switch coaches too much and its not their fault, I should stick with one so they can figure me out. The bottom line is Chad and Hany both did awesome work with me but the industry doesn’t favor one coach for a long term commitment; unless you’re at the top. When you’re a second tier pro trying to work your way into the top ranks you become second priority to other clients that may be better than you. I don’t blame Chad or Hany for prioritizing clients, if I had a guy that had a chance at a top 3 or winning the Olympia, I would be more focused on him as well. That being said, for my career I need to put myself first before anyone else and really try and dial things in.

Enough of that shit anyway, I’m sure there will come a day again when I use a coach, I just think after 14 years it was time I gave it a shot with my own knowledge I’ve accumulated over the years.

This prep started out pretty easy, mid way through was pretty easy and actually to date, is still pretty easy lol. I know what you’re thinking, I must not be working hard enough and I’m going to be shitty come showtime. Quite the opposite is true (so I think lol), there seems to be less pressure for some reason training myself. I’m not waiting for someone to tell me what to do, what to eat, when to cheat, when to rest, when to breathe, its all me.

I started out with more cals then ever before and not too much cardio, that worked. Then I increased the cardio and dropped the cals just a bit, still doing less cardio and eating more food then in the past, that worked. Just this past week at the five week mark I’ve increased my cardio to previous prep levels but still am eating more than ever before, still working. The amount of cardio I’m doing now is something I would have started at 10 weeks out in preps past. Less work, more food, until its time to ramp it up, that philosophy is working so far and only time will tell if its the new way for me.

At almost four weeks out I am about 260lbs in the morning on an empty stomach and, feel like I am about 5-8lbs from stage ready. My biggest fear right now is being ready to early because my weight has been dropping and I’ve had to add more food to slow it down. This is where I wanted to be at this point, my mind is right, my training is right, my diet is on point and I am ready for battle.

This year, I won’t be leaving early… 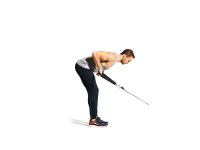