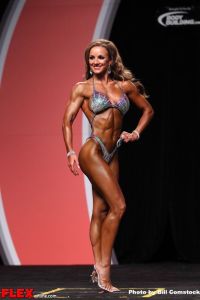 When he was 22 and lived in Massachusetts, Cutler traveled to Southern California to enter a local show. His plan to garner publicity worked. He won the 1995 NPC Tournament of Champions and, months before he nabbed a pro card on his first try at the 1996 NPC Nationals, he was grinning on a Muscle & Fitness cover. That’s the way he rolls. Over the ensuing 17 years, Cutler carefully plotted out everything: business, training, eating, and competing.

2. TURN UP THE VOLUME

“I’ve always been a volume trainer,” Cutler says. And, boy, has he ever. In 2003, I watched him do 10 back exercises for 43 sets over two workouts on the same day! There is a prevalent (and ofen irrational) fear of overtraining that leads many bodybuilders to lose sight of the growth-inducing benefits achieved by increasing their sets per workout.

“I’m not doing anything the way I did it before. I’ve changed everything,” said Cutler when I interviewed him in 2004, expecting to get a fairly “routine” routine. In preparation for that year’s Arnold Classic (which he won), he had indeed changed everything. The sport’s greatest advocate of volume training had dramatically reduced his workload and developed a pre-contest schedule that kept him up most of the night and napping thrice during the day. Before the year was over, he reverted back to something closer to his usual regime, but his ’04 adventure illustrated his willingness to experiment. He’s never adopted a rule he’s not willing to break.

One component of Cutler’s training he rarely diverged from is speed. Throughout his career, he rarely paused more than a minute between sets, and usually his pre-contest rest periods clocked in at around 40 seconds. Again, this is a rule he can break, and in recent years he’s extended his rest.

Cutler eats organic chicken breasts, eggs, and beef. He feels that consuming foods free of chemicals has made a subtle difference in his physique and may significantly benefit his health in the long term. 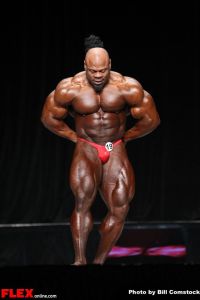 There were stretches of his career when he toiled alone, but more often than not, Team Cutler has had multiple members. In fact, during his prep for the last three Mr. Olympias (2009–’11), he regularly hit the weights with two or three partners per workout. (This also expanded his rest periods between sets.)

This four-time Mr. O possesses one of the greatest rear lat spreads ever witnessed. By 2005, his lat width was matching if not succeeding Ronnie Coleman’s. Cutler, like Coleman, also worked back twice weekly. One session focused on width (using pulldowns and other cable exercises), the other targeted thickness (mostly rows and deadlifts).

Deep-tissue massage is a crucial component of his recovery plan. At least once weekly, he undergoes lengthy massage sessions, sometimes leaving bruised and battered. He feels this probing, pushing, and scraping has boosted his recuperation and flexibility and thus aided growth.

After his stunning second to Coleman at the 2001 Mr. Olympia, it seemed inevitable Cutler would soon have a Sandow on his mantel. He sat out the 2002 Mr. O when an undersized Coleman looked especially vulnerable. Then came 2003, when a nearly 300-pound Ronnie Coleman shocked the bodybuilding world. Cutler was second again, but the gap between him and first had widened. In the aftermath, Cutler, who had been relying increasingly on machines and cables to refine what he assumed was enough size, went back to the basics. He knew he had to pack on pounds to hang with Ronnie, so he trained Ronnie-style: deadlifts, barbell rows, T-bar rows, barbell bench presses. Free-weight basics formed the core of his routines in 2004 and have remained there ever since.

As with all bodybuilders, Cutler’s lef and right halves are not symmetrical. His lef limbs are clearly superior to their right counterparts. He narrows this gap by including unilateral exercises in every leg and arm workout and placing a special emphasis on bringing up his weaknesses while still expanding his stronger side.

Unlike most pro bodybuilders, Cutler schedules some forearm and ab sets into his routine, even during the off-season. Likewise, though he has two of the sport’s best calves, he trains his lower legs as hard as every other body part.

When Cutler was a teen bodybuilder living in rural Massachusetts, he used to buy his beef by the cow, literally. He hit the 280 mark before his 20th birthday by training heavy and eating heavier. He’ll tell you that eating six or more high-protein meals daily isn’t something he enjoys, but frequent feedings have always been a necessary part of his growth plan.

Five years—that’s how long he was the Mr. Olympia heir apparent. Cutler was runner-up a frustrating four times, every O he entered, from 2001 to 2005. A lot of pro bodybuilders rose and fell during that span. All the while, the three-time Arnold Classic champ stayed focus on his ultimate goal. He learned from mistakes and used each O loss as fuel for his next attempt. That’s why it was all that much sweeter when he did eventually best Coleman in 2006 to hold alof his first of four Sandows.

“How many did I get, Greg?” he would ask me repeatedly in the many workouts I observed through the years. He knew he was somewhere around the 10–12 range, but he wasn’t certain of the exact tally. Throughout each set, he focuses on his working muscles, because he believes that calculating reps is merely a distraction.

Let’s get the terminology straight. Cutler refers to the lighter sets preceding his working sets as “feel sets,” not “warmups.” This is because he’s not merely going through the motion on those sets. Instead, he’s getting a feel for the weight, making certain his technique is on point, and monitoring his muscles to determine how hard he should push his working sets.

Twenty years afer his first contest, at age 38, Cutler suffered his first major injury with last year’s biceps tear. One key to bodybuilding success is injury avoidance, and Cutler did this by rarely going less than 10 reps per set in recent years, utilizing feel sets to gauge his muscles’ abilities each workout, and working around small strains and pains.

Whey powders boosted his daily protein intake. Creatine and BCAAs powered him through workouts. Vitamins and minerals ensured that the salad-adverse Cutler had all the necessary micronutrients for recovery. Throughout his career he’s been on the cutting edge of sports nutrition.

Until 2004, most of his sets were in the 8–10 range, and during his teenage years he often went even lower. But since then, he rarely strays from the 10–12 range for big body parts. Arms and calves are mostly in the 12–15 range.

19. LEARN FROM YOUR PEERS

After he lost to Coleman at the 2003 Mr. Olympia, he began to adopt some of what made his rival’s workouts so successful— especially free-weight basics. Similarly, when Phil Heath was closing in on him and after he lost the Olympia title to Dexter Jackson in 2008, he employed Heath’s trainer/ nutritionist, Hany Rambod, and Rambod’s FST-7 system. Sometimes to be the best you have to beat the best at their own game. 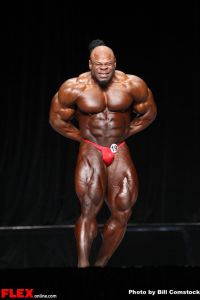 Cutler won his class at the 1993 NPC Teenage Nationals but lost the overall to Branch Warren. Back then, he kept a log book so detailed he noted not just every rep and every calorie, but even the timing of bathroom breaks! He’d stopped logging by the time he turned pro, but has continued to carefully analyze his workouts and meals.

Don’t ask Cutler for scary workout stories. He doesn’t have any reminiscences about 30 continuous sets of squats or giant set circuits that kept him hovering around a trash can, revisiting his protein. He never supersetted bi’s and tri’s until he couldn’t scratch his own head. He sticks to his training program, and that program has never included all-shock workouts from hell.

He learned what foot placements will stress various areas of his legs, what grips will best target sections of his upper body, and which exercises are most effective for his particular physique. Then he employs that knowledge to hit each body part from a variety of angles, with a particular emphasis on what he most wants to accentuate.

Where are the photos of a fat Jay Cutler? Where are the shots of a “front butt,” or a doughy face as round as Charlie Brown’s? Don’t bother Googling. You won’t find any. Throughout his pro career, he’s always stayed within striking distance of stage shape. Fat is bad for business. Year-round cardio has kept the wrong sort of pounds from sticking, and that, in turn, has allowed him to better monitor his progress and more effectively diet down to excavate the fine lines.

He has a rough outline for how each workout will progress, but doesn’t follow a detailed script. Instead, he analyzes how his muscles are responding and chooses his tools accordingly. Often, he will pause mid-workout so he and his training partner(s) can review how many exercises he’s done and what he should do next. Every workout is a work in progress.

He doesn’t do any elaborate psych-ups before sets. He doesn’t scowl or stomp around the gym. Instead, he’s frequently smiling and joking with partners between sets. Jay Cutler takes bodybuilding very seriously—as a competitive pursuit, a lifestyle, and a business—but he also has fun. He never forgets how lucky he is to make an excellent living from something he loves so much. – FLEX