NPC Chairman and IFBB Pro League President, Jim Manion and I have been friends since 1985. This past week I had a conversation with Jim, and here’s what was covered.

PM: Jim here we are three months away from the Mr. Olympia contest. What are your general thoughts on the line-up?

Well we have to start with the champ Phil Heath. I call him the Tom Brady of the bodybuilding world because everybody hates a winner who keeps winning. Phil’s going for his seventh title. But it’s in no way a shoo-in with guys like Dexter Jackson, Shawn Rhoden and Big Ramy breathing down his neck for starters. Back at my Pittsburgh show in May Big Ramy was in phenomenal shape at 348 pounds. Then you have William Bonac who was fifth at last year’s Olympia but on the post Olympia tour he beat the guys who finished 2nd through 4th at the Olympia. And you can’t discount Roelly Winklaar or Cedric McMillan, and then there’s Brandon Curry who’s showing great improvement. The line-up will be stronger than last year because the top six guys from 2017 haven’t competed this year and that shows how serious they are about getting prepped to knock Phil off. Getting into the top six will be a dogfight. Nobody’s unbeatable, Phil is great but so are the guys chasing him.

We’ve seen recent pics of Kai Greene in great shape. Any noises there that he may enter the 2017 Olympia?

Kai never seems to be out of shape but even his coach George Farah doesn’t know what contest Kai may do next. It would be a great thing to have him back in the Olympia. He belongs on the Olympia stage.

Would he have re re-qualify for the Olympia? 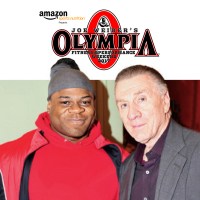 Technically he would have to, but someone with Kai’s record – three Olympia runner-up spots, three Arnold Classic Columbus titles  — is an exception.  The IFBB Pro League and the Olympia want to make the contest as interesting as possible for the fans, so we would give him a special invite, like we gave Kevin Levrone last year. So if Kai is listening I will give him an Olympia invite so he doesn’t have to go through any qualifying process. AMI CEO, David Pecker, is driven with a passion to continually elevate the prestige and fan experience of the Olympia Weekend. He wants to keep enhancing the reach and brand of the Weekend. Back in 2004 when American Media Inc. (AMII) went into partnership with the IFBB to stage the Olympia Weekend, David, made a public announcement that he would work toward making the prize money for Olympia athletes total $1 million. For the 2004 Olympia Weekend the total prize money was $420,000 (with $120,000 going to the Mr. Olympia winner). Today the total prize money is $1.3 million with $400,000 going to this year’s Mr. Olympia. As far as the Expo is concerned, the 2004 rendition had just fewer than 200 booths, while this year over 1,000 booths will be on display.

David is full of surprises; in 2014 at the moment of Phil Heath’s victory he suddenly pulled another $100,000 out of the hat and re-wrote the check onstage adding it to Phil’s original $300,000 check.

There’s a feeling from Kai followers that he won’t get a fair shake.

Whenever a champion racks up a series of consecutive wins like Phil we get factions who say the champ has an unfair lock on the title. This  goes back to Arnold’s days, through the reign of Lee Haney, Dorian Yates, Ronnie Coleman and now Phil. But you have to remember the same judges who judge the Olympia, like Steve Weinberger and Sandy Williamson, were the same judges who picked Kai as the winner ahead of Phil at the 2010 Arnold. With a champ winning multiple times there’s always a feeling with some out there that there’s some grassy knoll type of conspiracy in judging the Olympia. Look let me take my IFBB Pro Chairman hat off and replace it with a promoter hat. It would be a great thing, if we kept on having different champions with the deposed champ coming back the next year and so on. It would add such terrific excitement to the contest. No one in the IFBB Pro League, including myself, is out to screw Kai in any way. He could beat Phil or anyone else at any given time. I’m sure his fans would like him to compete, the whole bodybuilding community would like him to compete. The ball’s in Kai’s court.

A final word on the Olympia Weekend?

The men’s open will be very competitive. The 212 division sees Flex Lewis being pursued by Ahmad Ashkanani, Jose Raymond, David Henry, Hidetada Yamagishi and others. The Classic Physique division has really taken off and is becoming extremely popular and then we have Flex Wheeler entering it, so that will be interesting. The Men’s and Women’s Physique division continue to raise the overall standard.

The Rock, the number one celebrity in the world, with his Seven Bucks Productions team is going to be there with a high-powered crew shooting with numerous cameras as they compile a documentary built around the Olympia. He’ll probably have a few other celebrities with him so you’ll see him very active here there and everywhere.

Under the leadership of and energy of David Pecker, in tandem with ace promoter Robin Chang and myself and our IFBB Pro League committee, we are a team united in the goal of raising the excellence of the Olympia Weekend. Besides the contests there are countless activities taking place at the Expo, with all the stars of bodybuilding and fitness stationed at their booths – of which there are hundreds.  Check it out for yourself it’s the ultimate bodybuilding experience.

The Men's Physique competitor focuses on strength and conditioning.

Did they retain their crown or lose it to someone else?