What happens when you run a year-long trial pitting low-carb diets versus low-fat diets? The media erupts, of course. In the case of a recent study coming out of Johns Hopkins and Tulane Universities, which showed that low-carb diets performed better in just about every possible metric, the media frenzy was almost palpable.

But did the study actually show what headlines conveyed? There might be more to it.

Let’s take a look at the most important takeaways and see how they could apply to your diet.

Right off the bat, a key bit of info was left out of headlines. While stories loudly proclaimed “Low-carb superior to low-fat for weight loss!,” the actual study diet was only kind of low carb. In fact, to many Muscle & Fitness readers, it wouldn’t seem low carb at all.

The researchers put the low-carb group on a diet of 40 or fewer grams of carbs a day—very low carb. While the low-carbers gave it the ol’ college try—cutting carbs by 50 percent within the first three months of the study—they eventually plateaued and ended up averaging 112 grams of carbs per day. Much lower than typical American diets but not exactly what the researchers were going for.

How about the low-fat group? They technically met the study’s fat consumption goals, but just barely. At 30 percent of daily calories coming from fat, they were not that far off from the standard American diet’s fat percentage.

What did the study really show?

The biggest differences in the study diets were calories and protein. Both groups ended up eating far less calories than before the study but the low-carb group ate much fewer calories than the low-fat group and unsurprisingly lost more weight. This is especially unspectacular given that they ended up eating quite a bit more protein as well, which we know is associated with greater weight loss.

What can we take away from this study?

In the research world, this study was a big deal because it had a couple hundred participants, including a sizeable number of African American people—who have been underrepresented in previous studies and have a higher statistical rate of obesity—which makes it more applicable than previous studies.

As for you: If you are looking to lose weight or advise others, keep a few things in mind. First, shooting for a truly low-carb diet as a lifestyle is not always realistic, so be prepared for some substantial padding on daily carb intake. Second, low-carb is still a sensible option when looking to lose weight and concerns about cardiovascular damage likely are overblown—low-carbers in this trial had better heart disease markers than the low-fat group. However, don’t take it as a license to eat bacon wrapped sticks of butter on a whim. 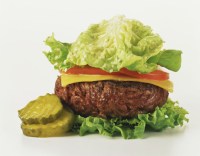 A few additional nuggets that weren’t reported in major media are useful. The study included a daily meal replacement for each group, which likely helped with the extremely high retention rate for such a long study, and also may have helped both groups lose weight. So some kind of daily constant may be a good idea when adopting a new diet.

The most important dietary advice from that week.

More importantly, a study came out in the same week reviewing a bunch of different dieting strategies and found that most any reasonable diet works if you can sustain it. So no, low-carb isn’t as dangerous as some say. But also, it’s most definitely not the only way to lose weight, and for many, not the most sustainable.

And what the most recent study really showed is that a moderately low-carb diet higher in protein is good for weight loss in the first three months (but this can vary widely by person). The biggest lesson: Don’t rely on headlines to summarize studies for you.

Get ripped in one week flat.

10 Keys to Starting a New Diet

These tips will help you maintain your diet and keep you on the right path.