It’s said that New York is the city that never sleeps, but the predawn scene surrounding Pier 46 in Manhattan’s Hudson River Park seems to prove otherwise. The nearby congestion-prone West Side Highway is virtually empty, and foot and bike paths that will be flooded with pedestrians shortly after sunrise are nearly deserted. But at 6 a.m., a small gathering of supremely fit people do their part in supporting the old adage. The 32 members of #theProgram are sprawled across a rectangular sliver of artificial turf, amped up and ready for a 45-minute ass-kicking workout.

Year-round, members of #TheProgram train four days per week at various locales around Manhattan, engaging in everything from yoga and team cycling to weight training and high-intensity circuits. Yet as demand for entry has increased, the group’s leadership has mindfully avoided adopting a pay-to-play business model. “One principle we have is that no money is involved; there’s no profit motive,” says Strauss Zelnick, one of the #TheProgram’s founders. “We’re looking for nice, congenial people who are friendly and fun to be with, and who are also serious about health, fitness, and wellness. If you’re a highly competitive or an obnoxious person, you wouldn’t feel welcome.” One thing is required of all members: the willingness to drag your ass out of bed before sunrise Tuesday through Friday to train. The 6 a.m. start time forces #TheProgram to become a priority. “You can’t stay up late misbehaving if you’re up at 5 a.m. to work out,” Zelnick says.

SEE ALSO: 11 Things You Need to Know About #TheProgram>>

How the group secures its funding for weekly visits to gyms and studios around a city as expensive as New York was not disclosed or discussed in depth, but smart money would point to Zelnick as the guy footing the bill. The 58-year-old media magnate and founder of Zelnick Media Capital (ZMC) is the CEO of Take-Two Interactive Software, publishers of the Grand Theft Auto and 2K Sports game franchises, among others. Previously, he served as CEO of BMG Entertainment and president and COO of 20th Century Fox. So if “America’s Fittest CEO” wanted to spin #TheProgram into a cash cow, he has the chops and the connections to do so. But such a move would sully the vibe Zelnick and Co. has cultivated— a supportive environment where members leave their egos at the door and unite to make the group stronger.

Eric Posner, co-founder of Swerve Fitness, an NYC-based cycling studio where #TheProgram trains weekly, is roughly 35 pounds lighter since joining up a year ago and has become one of #TheProgram’s de facto stewards. “We’re a group of mindful athletes, and we’re looking to elevate the person next to us,” he says, describing the ideology. “It’s about mindfulness, not just looks or materialistic or superficial things.

While there’s a certain “Skull and Bones” feel to #TheProgram, scoring an invite to train doesn’t involve passing a litmus test or memorizing a secret handshake. Instead, a current member will send an e-mail to Zelnick mentioning your interest. If all goes according to plan or there’s room for newbies, you’ll find yourself at a workout. If you do manage to get initiated and end up no-showing a session, expect group members to reach out in hopes of bringing you back into the fold. If flightiness becomes the norm, your name gets dropped after about a month, and a slot opens up. “It’s not a punishment,” Zelnick insists. “There’s just no need to include someone who isn’t going to show up.”

Keeping a finger on the pulse of the group requires Zelnick to connect regularly with his council. “It’s really a temperature check,” says Tony Richardson, a former New York Jets fullback who spent 16 seasons in the NFL. “We’ll talk over dinner, by phone or e-mail…about what workouts we’re liking or what changes to make.”

Those discussions may involve the workout structure or ways to better position members to achieve personal goals. Before Memorial Day, group members were encouraged to list a goal on a shared Google doc that they wanted to accomplish in the 99 days between Memorial Day and Labor Day—No. 99. For Dyan Tsiumis, that involved competing in an amateur bikini competition. Her No. 99 goal would serve as the culmination of a decision she made 15 years prior to live a healthier lifestyle. “I knew some people from #TheProgram would be in the audience, but about 30 of them showed up—some holding sticks that had my face on them,” she says. “But that’s what it’s all about and what we do—we check on each other and we care about and love each other.”

In the future, Zelnick hopes to see affiliate programs spring up in other cities, so long as the mission statement remains intact. “It relies on ambassadors reaching out and understanding that it’s not about money; it’s about spreading the word and encouraging people, and wanting to be part of a positive movement,” he says.

Back on Pier 46, trainer “Flex” Cabral, a 29-year-old former U.S. Marine, leads his sweat-soaked, huffing and puffing platoon into the workout’s homestretch. Though all members of #TheProgram are clearly exhausted, one by one their fatigue gets eclipsed as an infectious outburst of cheers and claps spreads from one end of the group to the other. The energizing surge of support is enough to clear the path to a strong finish.

At a little after 7 a.m., the West Side Highway is clogged, and joggers, baby strollers, and dog walkers clutter Pier 46. Just as #TheProgram’s workout comes to an end, the rest of New York City is ready to get its day started. 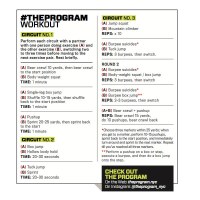 For more info on #TheProgram and its members, check out www.theprogram.nyc. You can also follow them on Instagram at theprogram_nyc.

Sleep Right to Prevent Back and Neck Pain

Give more thought to the way you sleep.

Relieve Back Pain in Quarantine

Combat stiffness and pain with these tips and stretches.

How To Build Your Own Home Gym

It may be a good time to start looking into creating your own iron paradise.