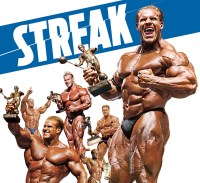 It had been so long we’d forgotten what it was like. He’d forgotten, too. Thirteen years is an eternity in bodybuilding, but that’s the time that passed between Jay Cutler’s eighth-place finish at the 2000 Mr. Olympia, and his sixth-place finish, at the same contest in 2013. In between, there were 25 consecutive contests (including 10 Olympias) over 11 years in which he either won or placed second. The only three men who bested him during that run were current or future Mr. O’s.

So we take this opportunity to salute the longest period of uninterrupted top two finishes in bodybuilding history. Just call it “The Streak.”

Jason Cutler was a phenom—the sort of genetic mutant who comes along once in a generation. At 18, he gained 50 pounds within four months of joining a gym. Even as a teenage competitor in his native Massachusetts, he pursued muscle with an obsessive passion.

“I never cheated on my diet once,” he says. “I wouldn’t even have ketchup. I wouldn’t have anything that didn’t make me a better bodybuilder. We can talk all we want about training or genetics, but bodybuilding is mostly about eating.” Once he began eating 30–40 egg whites, three chicken breasts, and a steak daily, he ballooned. At age 19, the 5’9″ Cutler weighed 260 pounds in the off-season. 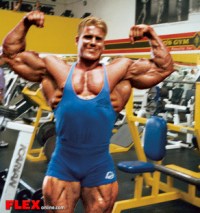 22, he journeyed cross-country to Southern California in hopes of getting noticed—and did he ever.

When he won a regional show at 241 pounds, he looked like the future. The hallmarks of his physique were already established—the ultrawide shoulders, the monster-truck wheels, the surplus of muscle everywhere. The next year, 1996, he took the heavyweight class of the NPC Nationals, his first and last pro qualifier.

In buttery conditioning at his pro debut, the 1998 Night Of Champions, Cutler placed a distant 12th. Similarly, he landed next to last in his first Olympia the following year. (Ronnie Coleman won both shows, establishing a narrative for Cutler’s career.)

But at a contest between those two, the phenom proved he wasn’t just hype: His fourth-place finish at the 1999 Arnold Classic hinted at just how high he could go with more polish.

At the beginning of the 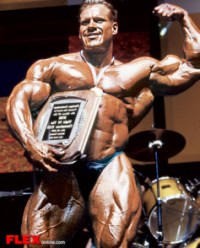 new millennium, Cutler’s future was cloudy. Would he forever remain unfulfilled potential, the sort of almost-contender who can squeeze into the occasional Olympia posedown and triumph in lesser pro shows but never vie for a Sandow? Or would he eclipse previous plateaus and reach for the summit? In 2000, he won the Night Of Champions, the very show he had flopped in two years prior. Then, he was eighth in that year’s Mr. Olympia, a mildly disappointing finish behind two competitors he had bested at the N.O.C. It was Oct. 21, 2000—so long ago Bill Clinton was still president. It would be another 13 years before Jay Cutler again finished lower than second.

Seven and then eight days after the Olympia, he racked up his first two of 25 consecutive top-two finishes when he was runner-up to Coleman in a pair of Euro Tour contests. The lineups were weak. Coleman was the only member of the Olympia posedown to compete. Nevertheless, unlike the Olympia, where Cutler was compared with only also-rans, the 27-year-old went mano-a-mano with the reigning Mr. O. It didn’t seem significant then, but the greatest rivalry in bodybuilding history had begun.

So that happened. Still, everyone assumed the bodybuilding rankings would return to their natural order once the perennial posedown participants gathered at the next Olympia. 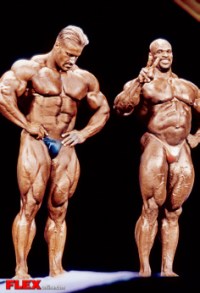 If Cutler— who sat out all of 2001 until the ultimate contest—joined in the O posedown, it would surely be in the fifth or sixth spot, a consolation prize that never seems to signify much. Then came the greatest shock in Olympia history.

The upstart didn’t only challenge Coleman for the Sandow in 2001, he rolled to a seemingly insurmountable six-point lead after prejudging. At only five pounds lighter than Coleman’s 265 but two inches shorter, the challenger had enough mass to hang with the champ, pose after pose. Cutler had better ab and quad separation; Coleman sported better arm and glute definition. Coleman, 37, roared back at the finals to win his fourth-straight Olympia in a controversial decision. Cutler was stung by the reversal of fortune, but it didn’t change the fact that he, at 28, was suddenly the biggest story in the bodybuilding world. He was the future. The future was his.

Click NEXT PAGE to see the rest of Jay’s streak! >> 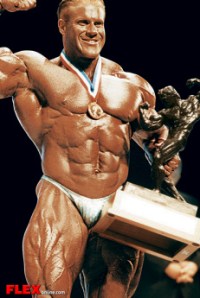 was denied the ultimate bodybuilding title in 2001, he denied us all the rematch we clamored for the following year. He likely would’ve won the O in 2002, when Coleman was at his worst. Instead, he took the Arnold Classic with straight firsts and then sat on the sidelines. He won the next Arnold, too, with ease. Then, in 2004, he came into the Arnold Classic much lighter (and sharper) and eked out a controversial one point victory. His shape—the result of an unorthodox training, eating, and sleeping routine that had him doing all three at odd hours day and night—was a conscious plan to, as he said, “give the judges a different look.”

It was an admission

that he was growing too content with his annual victories in Columbus each March, and he was wary of boring observers. That was his final A.C. He had nothing left to prove by winning it a fourth time, though doing so would’ve tied the record for most Arnold titles (now held by Flex Wheeler and Dexter Jackson). Afterward, he targeted only bodybuilding’s ultimate prize.

But before we journey again to the Olympia stage, let’s look back at 2003. Not only did Cutler compete in the Arnold and Olympia that year, but he did six more shows. That was an anomaly. In nine of his other 15 pro years, he competed only once. But in 2003, he did so eight times (twice as many as his second busiest year). He won five and was second in the other three—to Coleman twice and Jackson once. One amazing fact about his streak is the fact that the three men who finished above him during that 11-year span—Coleman, Jackson, and Phil Heath—are all fellow Mr. Olympias. (He also defeated all of them during that time.) He could only be beaten by a legend who is now, like him, a member of bodybuilding’s most exclusive club, the Sandow Society.

And, damn, did he fight hard to claw his way into that club. It seemed like a lock in 2003. Nothing in bodybuilding’s rankings had changed since his oh-so-close call two years prior. If anything, Cutler’s status had grown. He was the “uncrowned champ.” He won three out of three shows, including the Arnold, in the spring of 2003. Meanwhile, Coleman looked immensely beatable at the 2002 Olympia. And then it happened. He got punked, losing to Günter Schlierkamp at a contest after the O. And—poof—just like that, the king’s aura of invincibility popped. He turned 39 in May 2003. It was time for a change. Everything was set for Cutler’s coronation in his adopted hometown of Las Vegas.

Then 300 happened. Coleman showed up at the 2003 Olympia weighing nearly three bills (with spaghetti-striated glutes!), and no one could stand next to him without being consumed in his cartoonish shadow. The same story repeated in 2004. Cutler received two straight runnerups to Coleman’s victories. The outcomes were never in doubt. Cutler was indisputably the planet’s No. 2 bodybuilder, and with his consistent conditioning he seemed at little risk of slipping out of that position. The problem was that No. 1 was equally secure, too huge to lose. So the challenger went about reinventing himself. He adopted the same free-weight basics that Coleman favored but Cutler had eschewed in recent years.

“I preach the heavy core movements now,” Cutler said then. “It’s about sweat and pain, and that’s why Coleman’s the best. He never got away from hardcore training.” In 2005, a broader Cutler narrowed the gap, taking points from the champ. But it wasn’t enough, as No. 1 took home his record-tying eighth Sandow. Cutler had to settle for a record-tying fourth silver medal. Cutler was still only 32, but it was his eighth year in the Pro League. And by the time of the next Olympia he’d effectively spent five years as the heir apparent. Would he remain stranded on some high plateau, unable to find a route to the summit?

The four seconds were torturous, but they forged Cutler’s reputation as one of us. He was no longer merely a DNA anomaly, a phenom who could grow muscle at will. We could relate to him now. He was an oversized everyman, graciously accepting his runner-up check each Olympia and then returning to the gym with a vengeance, striving to overcome a seemingly insurmountable obstacle. His popularity soared. He finished second in the O two more times—to Dexter Jackson in 2008 and then Phil Heath in 2011. But by then he had his own Sandow collection. Two months before the 2006 Mr. Olympia, FLEX was there when he trained with Heath for the first time. “I got to get at least one,” Cutler said of the Sandow. “I got to get that thing before someone catches up to me.” 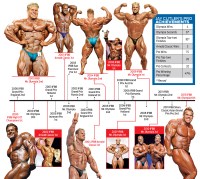 Click NEXT PAGE to see the rest of Jay’s streak! >> 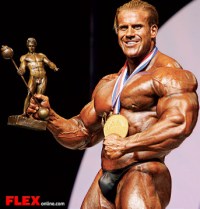 that thing. And when he did, Orleans Arena erupted with a thunderous standing ovation in support of the new king but also in stunned acknowledgment that a sitting king could be vanquished, something that hadn’t happened in 22 years. Having lost to Coleman the first 10 times he faced him, Cutler got some revenge by beating him not just at the O but three more times in three days on the Euro Tour that followed. He was finally No. 1, a role he had been apprenticing for over the past half decade. “Everybody congratulates me now,” he said in Amsterdam, during what was in effect his coronation tour. “What could they really say before, all those years I was second?”

Cutler was never as secure at No. 1 as he had been at No. 2. This struggle further endeared him to fans. All those seconds showed he was vulnerable – if only to a present or future Mr. O. So he had to work even harder to get to the top, to stay there, and, ultimately, to get back there. At the 2007 Olympia, when he wasn’t at his best but Victor Martinez was, he lost a round to the challenger, then barely squeaked by him for the victory.

The following year, when he surrendered the crown to Dexter Jackson, it only seemed like the start of an inevitable slide. He turned 36 in 2009, and had now been competing for 17 years. Injuries were slowing him down. He couldn’t keep pressing the accelerator, the consensus said. He needed to ride the brakes.

But Cutler proved the doubters wrong once again. He roared back with his most convincing victory in six years, winning the 2009 Olympia by the widest margin in history (the next four places were remarkably close to each other on the scorecard but far away from the victor). He won his fourth Sandow in 2010 by fending off hard-charging Phil Heath. Then he succumbed to the Gift at the 2011 Olympia and again at the Sheru Classic in its wake. The latter contest was the 25th consecutive time he placed in the top two.

After a two-year hiatus from the stage, Jay Cutler returned to the Olympia in 2013 and placed sixth. He was 40, and, after only training all-out for a few months, he was a downsized version of his former self. Backstage after prejudging, when he knew the streak was ending, he said, wistfully, “It would’ve been good to have retired with that still going. I thought about that. But I’m a bodybuilder. I wanted to give it another shot.”

Whatever his future holds, this four-time Mr. Olympia, three-time Arnold Classic champ, and six-time Olympia runner-up will forever be immortalized for the span that encompassed all of those feats—the 11 years and 25 contests in which he never placed lower than second—The Streak.

Where legends are made!