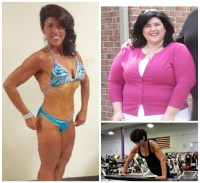 When Milwaukee-based Jamie Morgan’s husband, Rick, posted her 212-pound weight loss success story on Reddit’s Fitness and LoseIt boards this week, the new figure competitor had no idea how overwhelming the community’s response would be. (Four days after it was posted, it has nearly 1,000 comments between the two boards.) “It was extremely rewarding to see people are excited and inspired by my journey,” she says. “I want people to know they can do this.”

Though 38-year-old Morgan says she was obese for most of her life and conscious of it, she was always upbeat and positive and her weight didn’t spiral out of control until unresolved issues from her past came to the surface, followed by the sudden death of her mother. “I was eating to squelch the emotion of that, and it led me down a dark path and depression which was rare to me.” In 2009, after Morgan lost her job, a friend told Morgan that she thought she was depressed and needed help. “I needed to tackle the depression to get healthy emotionally and sought counseling,” she says.

“Six months into counseling I thought there might be a connection between the emotion and the food,” she says. “I started to want to move and care about my body and what I put in it.” In her household growing up, Morgan associated food with comfort and love and didn’t know anything about portion sizes and nutrients in food. She saw a local dieticIan For high-level advice so she could learn how to eat. “Once I had that foundation I wanted to move more and got bit by the fitness bug. I’ve never been an athlete, but all of a sudden, I found an inner athlete. I fell in love with lifting and training.”

Ashamed of being in a gym setting, Morgan ramped up walking and at-home exercises until she felt comfortable going to a gym where she spent most of her time doing cardio until a friend got her to try a TRX class. After trying that class, Morgan hired a trainer she worked with a few times a month whom she says, “helped me build up my confidence in my body and what it could do.”

When she was around 195 pounds, a figure competitor at her gym asked Morgan if she ever thought about competing. Morgan laughed out loud at the idea, knowing she wasn’t comfortable wearing a two-piece in public let alone on stage. But Morgan kept the idea in mind and this time last year—40 pounds heavier than she is today—she told her trainer that she wanted to compete. They kicked her training program into high gear doing more traditional strength programming, body weight exercises, kettlebells, and TRX training and ab work. She had another trainer friend who coached bodybuilders and helped with her nutrition and the other pieces of the puzzle to get ready for competition. “People in my gym started taking notice of what I was doing and they offered help,” she says. “It’s amazing how generous people have been.”

Morgan stepped on the stage of her first NPC show on October 18th at 5’8” and 158 pounds, four years from when she first started her weight loss journey. Though she didn’t place—and knew she’d have points deducted for excess skin—Morgan says the experience was fun and rewarding, and hopes to learn more about competing at her next show on November 22nd.

The key to losing all of this weight without crash dieting, pills, or crazy workout routines was “small, sustainable changes,” she says. “I couldn’t have gone from 0 to 100 and had success.” Success isn’t linear and measured on the scale—it’s about making progress. “Sometimes success was logging all my food for the day or hitting my water goal,” she says. “It’s rewarding to know I can show people what’s possible. It’s all internal and we have 100% control over diet and exercise. That’s really empowering once you realize it.”