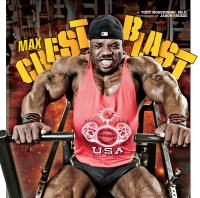 When he makes his pro debut this May on the Tribeca Performing Arts Center stage in lower Manhattan, no one doubts Max Charles will have the mass to fit right in. Carrying more than 300 pounds on his 5'11" frame, this bodybuilder from Huntington, Long Island, by way of Haiti, is a late-morning fixture at Bev Francis’ Powerhouse Gym. Charles is always covered up in the gym, from his baseball cap to his XXXL sweats to his work boots. Come May, what might surprise a lot of people unfamiliar with Charles’ physique is how tiny his waist is and how good his lines are: He’s a mass monster with an aesthetic bodybuilder’s tiny waist and hips.

Charles has been taking steps to make sure he doesn’t leave any bases uncovered for his first foray into IFBB competition. An unorthodox, instinctive volume trainer who often creates exercises to suit his purposes, Charles has been focusing his chest workouts on his lower pecs. “I want to really bring out that line where my chest crests my abdomen,” he explains. “When I throw my arms up in a front double biceps, I want that line to be apparent.” At his level, it’s all about detail and conditioning, and Charles knows it. Let’s look at how he trains his pecs as he begins his contest prep for the NY Pro.

Charles is careful to warm up his elbows before he trains chest. His favored warm-up movement is several sets of various triceps pushdowns, concentrating on the motion and the feel in his joint rather than any triceps contraction. Throughout the chest workout, his elbows are kept tight and warm in a pair of neoprene wraps.

He always starts his chest workout with incline presses, most often with a barbell. “If I change it up, it’s because I have a little injury or something,” he says. “Otherwise I always start with inclines.” He’s been known to do seated Hammer Strength incline presses, loading the machine to its capacity with 45-pound plates, then sliding more 45-pounders onto the padded hand grips themselves— quite a sight to see. With a barbell, he’ll progress from one plate per side to four, for sets of 20 reps. His rep range is purposely limited: about six inches. As soon as his upper arm is parallel to the ground, he’ll start to press and he won’t lock out.

Charles does his set, followed by his partner, J.B. Baptiste, then Roy Nebbia. “I want to give these guys a shout-out,” Charles says. “They come into the gym to help me with my contest prep training even when it’s their own day off from lifting.” No sooner has Nebbia finished than Charles is back on the incline for another set.

Keep in mind, “that weight” for his sixth set is five 45-pound plates on each side of the bar. Charles will get five or more before Baptiste and McCullough strip a plate from either side. Then he’ll get as many reps as he can before the guys remove another plate. And again. And again. By now Charles isn’t counting reps: He’s feeling the burn as he attempts to shuttle as much blood into his chest as he can. 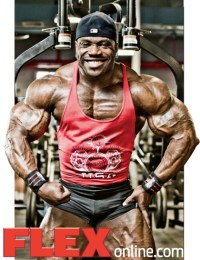 “I like to use free weights for the beginning of my chest exercises,” says Charles. Now that he’s blasted his upper pecs with inclines, Charles is shifting the emphasis to his mid-chest. When it’s pointed out that a lot of higher-level bodybuilders abandon fat bench presses because of safety issues, Charles explains why he’s comfortable with this movement. “I feel safe because I start with the inclines. If I started with flats, I’d be going heavier and there might be a risk to my shoulders; but I’m tiring the muscle out with the inclines so I can’t go as heavy as I might otherwise.”

For Charles, “not heavy” is still four plates for 4 sets of 20 short, choppy reps. “I feel this range of motion keeps tension on my chest, taking my triceps and elbows out of it,” he explains. “Some people might criticize what I’m doing, but I’d argue it works for me.” Interestingly, everyone who deigns to criticize Charles’ form does it from the safety and anonymity of a keyboard.

His last set of flat bench presses will be a dropset, to pump more blood into the muscle. Charles estimates he’ll get 75–100 reps on this set (he doesn’t count the reps, but his workout partners do). 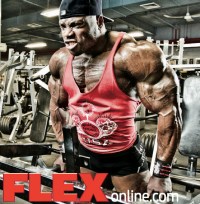 This is one of those movements where Charles gets creative. He’ll lean into a plate-loaded triceps pushdown/dip machine, standing with his feet all the way back, facing forward. Charles’ lower chest crests the pad your back would normally be pressed against. He grips the handles wide, hands facing out like a benchpress grip. He’ll press down and let the handles up six to eight inches, targeting his lower chest. He isn’t sure how many reps he’ll do: Once he counted 24. When asked where he gets all his energy from, the 34-year-old stated, “Here’s the thing,I believe your body will acclimate to high reps with heavy weights. You just have to be willing to push yourself and find what works for you and not be worried about what others in the gym around you think of how you train.” 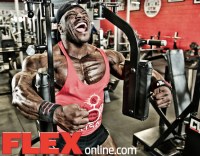 Now Charles wants to stimulate his inner chest. He stands in the pec-deck machine, leaning his back against the pad. Arnold Schwarzenegger once said the correct way to execute a flye is to imagine you’re hugging a tree. The 300-pound Charles—he’s on target to compete at the NY Pro somewhere in the 270s—is so enormous he looks like he’s hugging the machine itself.

Charles doesn’t rest his forearms against the pads. He has the pads in the crooks of his elbows, his hands free and open, facing each other. “I’ll do lots of reps to failure with the whole stack,” he says. “I don’t want to count the reps. If I count them I might get stuck on that number the next set or the next workout. I can’t limit myself.”

(on pullup machine) 3 sets, to failure

This is another movement in which Charles’ talents as a training visionary become apparent. How does he turn an assisted pullup/dip machine into a chest exercise? He stands before the machine, placing a hand on either side of the pad you’d normally kneel/stand on. His hands face each other. Charles presses the pad down, the stack goes up, and he does it again. And again. Until he can’t anymore.

“I feel this in my lower chest, too,” he says. “I’m not afraid to experiment in the gym. I might be quiet during a workout because I’m focused, but I’m always watching what other people are doing and how they’re doing it. I’ll watch someone doing pullups and I’ll think, hmm, I can use that to do lower chest.” 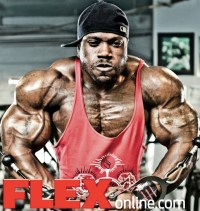 This is it: Charles’ final exercise in his chest routine. When he’s finished with his three sets here, he’ll have completed a total of 22 altogether. Charles considers this a finishing move, and his range of motion here is more of what you’d normally see anyone else do.

With arms that stretch the tape close to the 24-inch mark in the off-season, Charles is asked if he feels chest exercises are working his arms more than his pecs.

“When I used to use what people called ‘a full range of motion,’ I’d be stimulating my biceps and triceps more than my pecs,” he says. “With the shorter range, I feel it more in my chest. There’s no tension in my arms. Doing it my way, I feel I’m getting more of a squeeze, more of a push than anybody doing a full range of motion.”

There will be some really big men onstage at the NY Pro: Juan Morel, Steve Kuclo, Jon Delarosa, and Akim Williams. Big Ramy (Mamdouh Elssbiay) will be stateside to defend his title. Charles is gonna fit right in. “I’m excited,” he admits—and he sounds it. “I’m feeling very good.  – FLEX